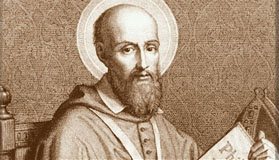 „To become a saint, not much theory is needed, but a lot of practice.”

He became famous as an ascetic preacher, primarily an ally for poor people, children and youth. Person of supernatural courtesy and understanding of the human condition.

In 1665 he was proclaimed a saint,
in 1882 The Almshouse managed by Anna Kobylińska is dedicated to his name,
in 1887 he became a Doctor of the Church,
in 1923 he is named the patron of writers.

Saint Francis left a rich literary legacy in the field of Christian spirituality. Francis not only wrote beautifully about true piety, which is expressed by love but also showed how it should be implemented in his everyday life. – “The only measure of love is love without measure.”

The key idea of Francis de Sales was the harmony between faith and everyday life.